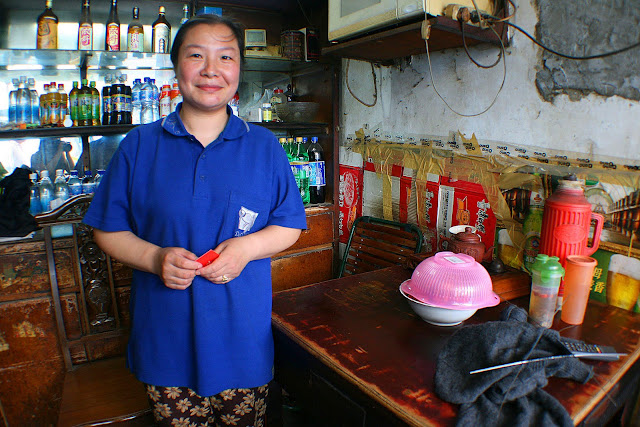 Resident:
I have a house in Pudong, it’s ok.
Someone came to talk to me in September.  They told me they want to build a house six floors at most.  But I don’t agree, they should offer to pay money.  I refused because you cannot afford this land, this is Shanghai.
They told me if you move early we’ll pay you more.  The earlier the more money.  But I complained at first, in June they offered RMB 600 per square meter. Then they changed in September to only RMB  400 per square meter.  In October it will be RMB 200 per square meter. We cannot talk because it changes.
Now they stopped talking, nobody comes to talk. They said since it is the EXPO they need to stop.  They are in a hurry because they started to move people when my son was just in 2nd grade, now he is graduated from middle school, in 9th grade.  So seven years passed but still they haven’t finished moving everyone out.
It would have been better for you if you moved early?
Resident:


Yes we also want to move as soon as possible, but they only came with their offer last September, but their offer is too low.
These are the two offers they made.  The other one is the 250,000 per person. You take the money and you will get nothing else, no house at all. The house they offered is very far away, it takes 1.5 hours with no subway. The children still have school here, so it’s troublesome for their education. The education accepts students according to hukou, so they are not accepted there. 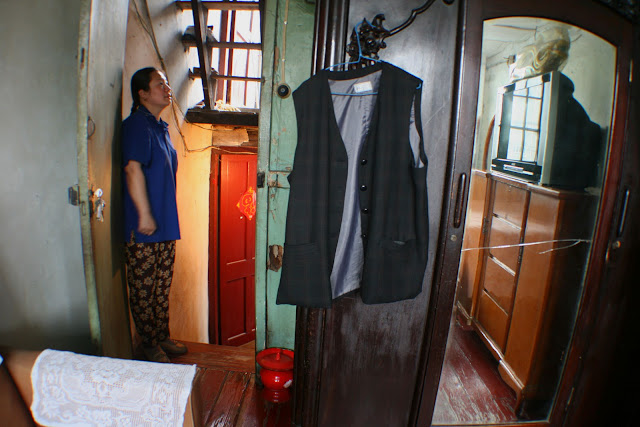 Our old house has two floors, we’re doing business.   We have been here for 20 years doing this business and we depend on this.  If we move they will not give us the shop.  They only give us a house.
When we move they will only give you the house but not the business.  My husband is more than 50 years old and if we don’t have the shop so what do we live on then?
They asked us to find a job by ourselves. How can people like us at this age find work in Shanghai?
Because we can’t agree on that, I tried anyway to get some help from the community organization. She tried everything but just can’t succeed. She wants to meet the investors and talk to them, but they will not allow me to meet the investors. Our requirement is not high.
What’s your idea for this solution?
Resident:

RMB  4,000,000 around, I want cash. So we can make a small business.  I have children and a mother-in-law to feed.  This house now is my husband’s house.  It’s decades old.  In 1993, we were married and when I came here, the shop was already doing business.
During the Cultural Revolution the time passed, personal stuff went to one organization. The public fortune and private fortune came together. Since then this house was taken by the country, but we are still here but it’s not ours it’s the country’s, they took the right to own it and now we rent it.
The neighbors have no way to choose. The government offered them a little more than RMB 300,000 they have no choice only take the money and go. But we’re doing business so we cannot accept this. The neighbors who moved complain about the transportation, everything there is inconvenient.
Also my neighbor told me don’t come there, everything is bad there. The new place is too far away and you can hardly call it a residential area because it’s new. To see the doctor or go to the market to buy vegetables, it’s all inconvenient.
I’ve been there, it’s very very far.  It used to belong to Nanhui, a year before it became part of the Pudong new zone.
If they gave you RMB 4,000,000 what will you do?
Resident:

We will still do the business like this.
They say the house now is RMB 70,000 per square meter here. Quoting from the newspaper, there’s an article that says that in Shanghai, the average cost of every set of housing is RMB 17,000,000.
As citizens we are fine if they demolish the old house, if they just give us back exactly the old house in a different place we’re fine with that.  Instead they force us to move. And some neighbors, they are chased after to leave.
Now some people who have been forced are suing the government. They even went to Beijing but it was all in vain.
The neighbor’s husband is a disabled man, every day they went to the municipal government but nobody will meet them and talk to them. They were forced to go Jan. 4 this year because they said they would demolish the house by force on Jan. 5, so they left one day before.
They’re not talking. They don’t want to talk to us, they just brush us off. They told us that we’re not behaving the way they want. They told me if you don’t accept or think it’s unreasonable you can go to the Huangpu court to sue, but nobody agrees.  They write it down in the contract if you think you cannot accept what they offer, but nobody will accept this to sue. We can’t win if we sue.  It’s impossible the court will not accept our case.
We all hope to improve the life. We hope to demolish to move, but we are also very afraid of that because the place we are going is too far away.  Everyone knows this.
In this house we store our stuff here, so we’re prepared to move. This has been prepared for a long time, all the suitcases here, we’re prepared to move. 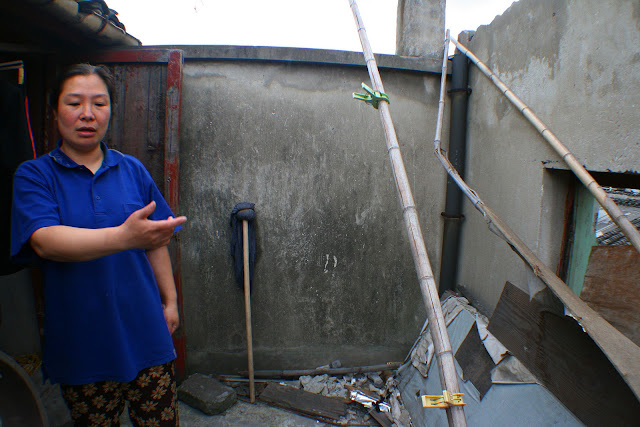 It was not like this before, when they demolished next door, they ruined the roof.
It used to be very beautiful. When they demolished the house next to ours all the water came in and destroyed our house.
When they give us money they don’t care if you have work or not.  Whether you have work or not they give you the same. We are together with this house. So they offered 20,000 or 30,000 at the first discussion. That was too low and unacceptable.  So the second time there was two policemen without the official. They said they came to cooperate with the work.
The policemen asked us what we are doing here, they said they came to give us the paper to leave. I told them to take the paper back, I refused.  They just tried to persuade me to take it, just take it now.  So I threatened them back. I said  “If you demolish our house by force I’ll show you what I can do!”
I know after you take this paper, I know the procedure of demolishing the house by force will begin. Because we are normal common people, we have no space to complain, we can only use our life to resist. You can’t just stomp on me like an ant.
The third discussion also failed, after these seven years I know it will fail. After all these years of talking we know it will fail. I said I don’t want to quarrel with you because I’m a host and you come to my house. If you don’t come here, I don’t know who you are. The two policemen left.  Later they tried again to discuss but every time they just wanted to give me the paper to demolish my house by force, I just refused. 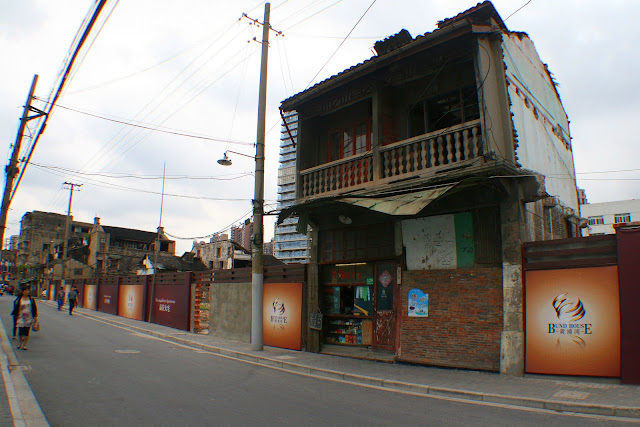 Now it stopped, just because the EXPO started. Because there are a lot of foreigners so it would look bad.  After the EXPO they will start again with us.  Only several days before the EXPO there were 4-5 families moved by force.
In what way were they forced?
Resident:

The policemen and cars, the community organization and the moving company trucks came.  I saw that they just went to the house, grabbed the people and took them out.
They took them to the police station and after the house was demolished they released the people so they could not have a home, just had to accept the new place. They took all their belongings to the new place very far away.  The police just told them, their furniture, everything is there, just go there.
Did they just go to the new place?

Resident:
No, they rented a house, they’re trying to sue.
Can you organize a group of people to talk to them?

Resident:
No no you can’t do that. If you do that they will think you are making a disturbance. They will catch you. They will say you are making disorder to society which makes us common people afraid. We don’t dare to do that.