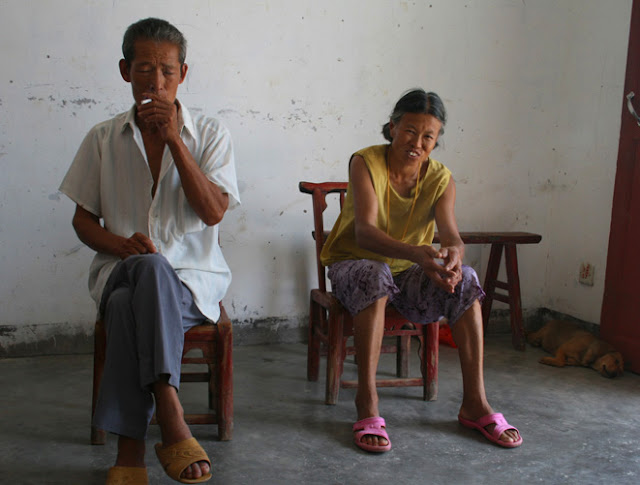 Originally farmers in a village near Chongqing, the Yan family was displaced in 2002 by the Three Gorges Dam project and relocated to Chongming Island near Shanghai. In Chongming the family continues to farm as a Sichuan minority. The transcript follows covering descriptions of their lives and related viewpoints.
Mrs. Yan:
Other people think we made a fortune because we’re Three Gorges migrants, like we received 300-400,000 yuan but actually we only received less than 5,000 yuan.
The government gave us some money for the land. And the money for the water and electricity we owe the government but we didn’t pay it.
All the furniture we brought from the old house. We had to pay for the shipment. The shipment expenses for each person was several hundred yuan. So the actual money we got was a little more than 4,000 yuan for each person.
In the first 2 years, each person got 38.75 yuan per month for living expenses. The total money for the house is more than 80,000 yuan, we are paying for it with loans.
Where was your old house?
Mrs. Yan:
Our old house was in the lower part of Chongqing by the bank of the Yangtze River. My sons also worked outside of Chongqing. They worked nearby the house or they farmed. In the old house we fed pigs. Everybody there had pigs. We feed the pigs for selling but we will leave one pig for Spring Festival. At that time we kill it and eat the whole pig. This tradition happens still. The people here they don’t kill pigs for Spring Festival. They only buy several kilos of pork. It’s very different from our traditions in Chongqing. 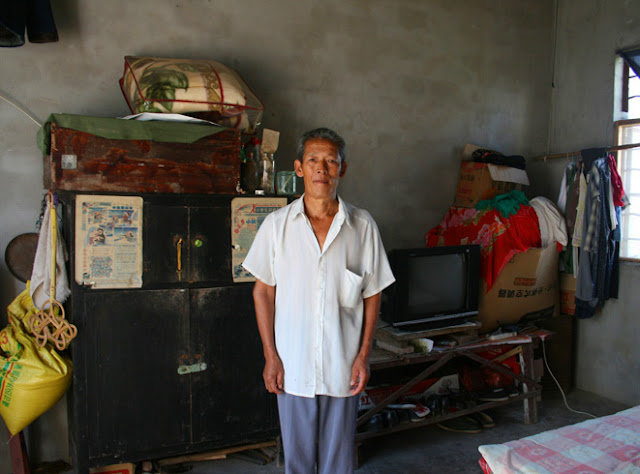 Do you have family still in Chongqing?
Mrs. Yan:
I have an older sister. I am the second child and I have 3 younger brothers. They are all still in Chongqing.
Mr. Yan:
I joined the army when I was 18. I lived a military life until 1969 when I got married. Our family house was about 100 square meters.  It had walls.  All together we had 4 rooms in one line.  The kitchen and toilet were outside.
We had 4 rooms. The two living rooms were very big. Each living room had a door and we built a wall inside each room so if you counted them we had 8 rooms but it was actually only 4 rooms.
Why two living rooms?
Mrs. Yan:
We had two living rooms because we have two sons.  We built the two living rooms for when our sons got married, so they would each have one. Each living room can hold 8 tables for a wedding ceremony. So the living room was quite big. The daughter in law will bring furniture and we put some in the living room and some in the bedroom.
How was the relationship with your neighbors?
Mr. Yan:
Our relationship with the neighbors was very good, epecially during harvest, we helped each other a lot. We don’t need to pay to have help, we just treated each other for dinner. Most of the young people got together to work.

How many people lived in your village?
Mr. Yan:
There’s 11 groups in one village. Each group has 200 people. So all together more than 2000 people lived in the village.
Mr. Yan’s Son:
We were not so familiar with all the 2000 people, but we were very familiar with the groups next to ours.
Mr. Yan:
No I knew a lot of people in the entire village, because I worked as a leader of our group. All of the 11 leaders had meetings. So I knew many more people.
What were some differences when you moved to Chongming?
Mr. Yan:
In Sichuan we knew people there very well. We could play cards or just talk. Everybody did. The first two years here was hard because we don’t know anyone here. It was a hard time. The first two years we couldn’t understand the dialect here, how people talk. We missed our old place because we lived there for more than 30 years.
Mr. Yan’s Son:
All together more than 7,000 people moved here. We were divided into 3 batches.  The first two batches each had more than 2,000 people. The third batch had a little less than 2,000. We all live in different villages.
This group we live in is the 5th group. There are 3 Sichuan migrant families living here, which is just my father and mother, my family and my brother’s family. I have two sons and my brother has one son.
We spent at least 2 years to know the local people. We made new friends here but we feel more intimate with Sichuan people. The local people here they don’t visit each other so often. But in my old village everyone loved to visit each other, everyday. This new village doesn’t have this custom. 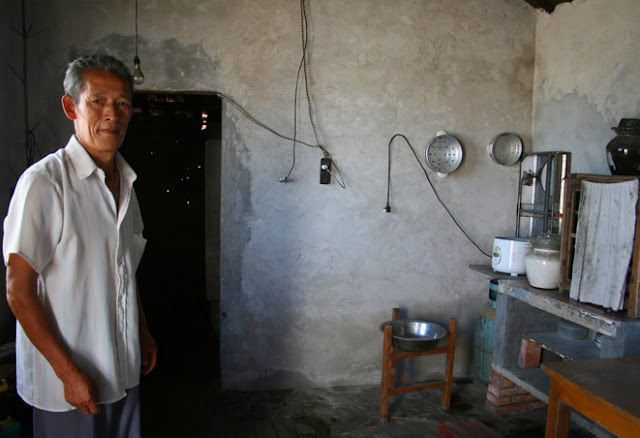 How is the rest of the environment?
Mr. Yan’s Son:
The general environment of the new place and old place is almost the same because it’s the countryside. The house here is more beautiful and we don’t need to spend too much time farming. It’s more flat here.
This place is good the only problem is the house. Because the government showed us a picture of the house but when we came here it was different. There should be some decoration, but there is nothing. All the migrants here didn’t pay the bills because we didn’t receive the house we were told we would get.
Mr. Yan:
If the local government meets the standard of the picture they showed us before then we will pay for the electricity and water.
Did the village leaders come to visit you?
Mr. Yan’s Son:
The first few years the local government would visit the old people. But now nothing. I just hope the whole situation will improve, but it will not be to serve any one individual.
How did you know you would come to Chongming?
Mr. Yan:
The government has rules for the places each family goes. But before we accept the place the government chooses for us, we have the right to have a look to see whether we like it or not.  When we came here we only saw the general condition of the place. We saw the transportation, the land, but not the house because it wasn’t built.
The government paid for the travel when we came to have a look. Each family had one person come as a representative.
What was your reaction when you were told you had to leave?
Mr. Yan:
We have no choice, we had to leave. Even my eldest son didn’t want to move. 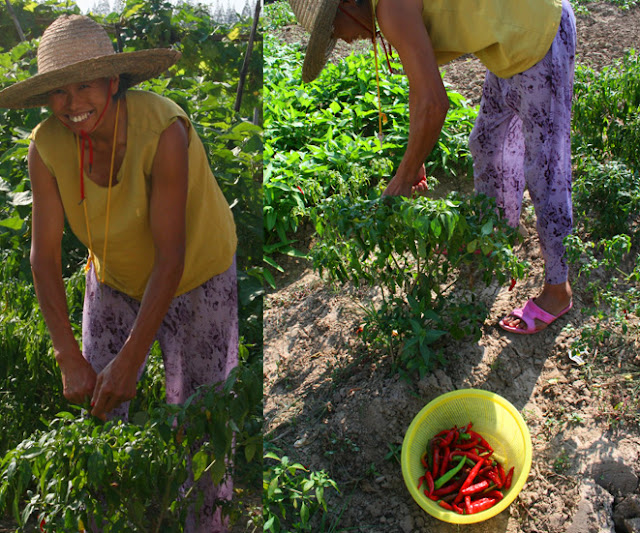 Later Mrs. Yan in the garden, what are you growing?
Mrs. Yan:
I brought the seeds for the peppers here. The local people here don’t like to eat spicy food.  They eat their leftovers for dinner but we cook every meal.